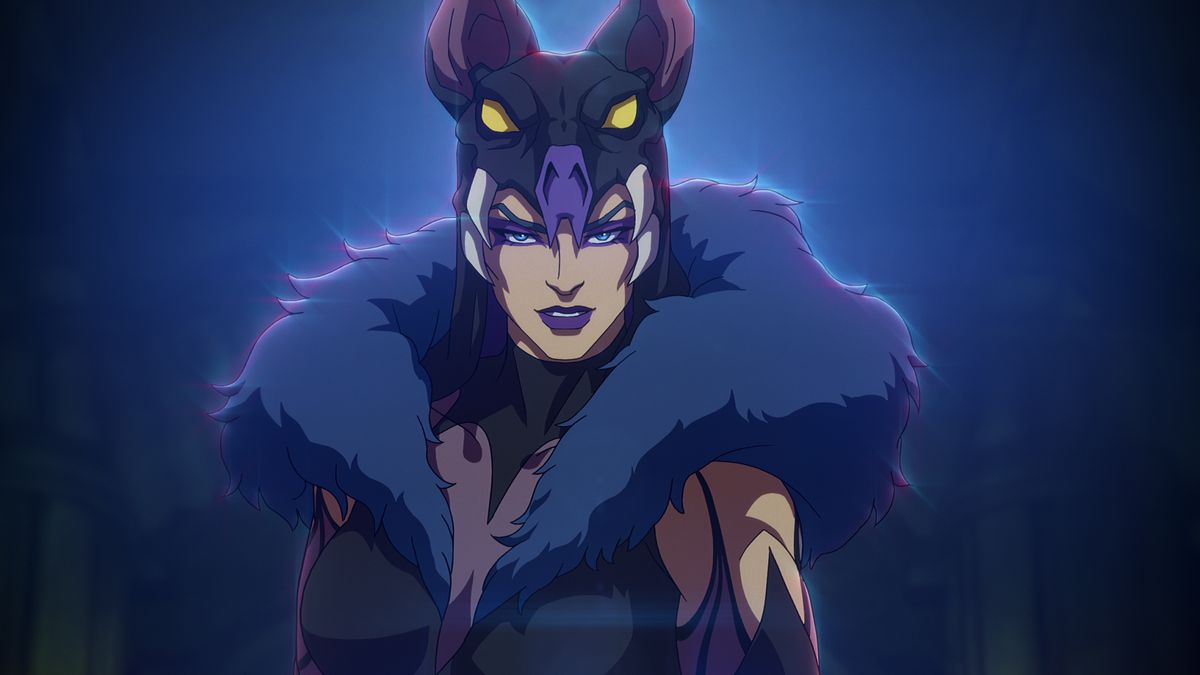 Part One of Masters of The Universe: Revelation met with a lot of controversy. Lots of complaints ranged from it being too “woke,” to false advertising over who led the show. I didn’t feed into any of that. Honestly, fans are extremely fickle in the things they like. I prefer to judge things on their own merit. Masters of The Universe: Revelation Part Two is definitely better than the first part, which wasn’t bad in its own right.

When the show picks back up, Skeletor has finally emerged triumphant and obtained The Power of Grayskull for himself. Adam is bleeding due to the seemingly fatal blow Skeletor dealt him at the end of Part One. The Sorceress is trapped in a field, and Man at Arms incapacitated. Before Skeletor can deliver the killing blow, The Sorceress expends the last of her power to teleport Teela, Adam, Andra and Cringer away. For her efforts, Skeletor runs her through with the Power Sword, killing her and leaving Man-At-Arms devastated. Skeletor then elevates Evil Lyn to become his Sorceress along with the curse of preventing her from ever leaving Castle Grayskull. This leaves Evil-Lyn upset at the prospect of being a tool, instead of an ally.

Elsewhere, Teela and the others awaken to find themselves in the courtyard of the Royal Palace of Eternos. Adam is healed by Teela, thanks to her latent magical powers. Teela’s mother, The Sorceress, had bound baby Teela to her, and her magic right before ascending to her role as The Sorceress. She mentioned that Teela would be able to tap into the powers at a moment of need. The group discovers that the citizens of Eternos are evacuating. Before long, Skeletor descends upon them and turns the fleeing populace into an army of the undead. Skeletor then corners the heroes inside the Royal Throne room, confronting Adam again, taunting him over not using the Power for selfish gain. Adam then turns the tables on Skeletor by invoking the Power WITHOUT using the Power Sword.

However the result turns Adam into a rampaging, mindless Hulk of a He-Man. One who proves dangerous to everyone around him, friend AND foe. The action here is what one saw from The Hulk when he stormed Asgard in Hulk Vs. Thor. It was pretty satisfying to see Adam unbridled with power. The whole ordeal gets out of hand, but before Skeletor can unleash a Frieza like Death Ball of energy on them, Teela taps into her hidden powers again and chants her mother’s teleportation spell.

Frustrated by their second escape, Skeletor turns his ire upon Evil Lyn. Here we start to see the plot thread from Part One picked up again, why does Evil Lyn put up with Skeletor? Both Beast-Man and the imprisoned Man-at-Arms plant doubt in her mind that she should not be following this man. Not with the amount of power she now wields. We’ll revisit that at a later time. Teela and company find themselves in the Mystic Mountains, where the citizens of Eternos fled. Adam, still as Hulked out He-Man, is uncontrollable. He storms the encampment, wreaking havoc on all the royal guards and then threatens King Randor, his father. Randor appeals to him and apologizes for not telling Adam how proud he was of him, even when he didn’t know he was He-Man. Adam releases the Power and collapses into his father’s arms.

The Revelation part of the show once again comes in. Adam is stunned to hear that his apparent death has torn his parent’s marriage apart. Randor blamed Queen Marlena for hiding Adam’s identity as He-Man from him. Marlena in turn became resentful of King Randor’s reluctance to see the nobility within their son. As with real world couples, Marlena tells her son that time sometimes changes people in ways that makes them grow apart. Speaking of growing apart, Evil Lyn reaches her breaking point when Skeletor admits that his entire endgame is all about killing Adam. She realizes that he doesn’t care about anyone, but his petty games of besting his archenemy. Especially, not her.

After a heart to heart with Beast-Man of all people, she enacts her plan to wrest power from him. She seduces him with the promise of sex on the Sorceress’ throne, but gets him to release the Power before she will give herself to him. Like any other horny fool, Skeletor does just as she asks, allowing Evil-Lyn to grab the Power Sword. After berating him for his constant abuses of her, and his pointless quest to best He-Man once again, she invokes the Power for herself and becomes an all-powerful God like being. After discovering there is no greater purpose to the Power, no higher being ordering their steps Evil Lyn resolves to break the cycle and end all of existence. She begins her plan by wiping out Preternia with a snap of her finger. All of the previous Champions are wiped away in an instant.

All of this sets the stage for the final battle at Castle Grayskull. After banishing Skeletor from Grayskull, he somehow finds himself captured by the Eternos forces and reveals that Evil-Lyn has betrayed him. Skeletor is forced to join forces with his enemies to prevent Evil Lyn from carrying out her plan. Adam and Skeletor plan to confront Evil-Lyn, while the King & Queen gather the people of Eternia. Teela believes that she must find a way to become a sorceress herself for them to stand a chance.

Evil-Lyn isn’t feeling too threatened by the two archenemies when they approach her and dismisses their attempts to attack her. When she see’s the oncoming army approaching the castle, she completely raises the dead, an brings forth all of Subternia led by Scare-Glow. However, she also resurrects Orko who has fully mastered his powers and battles her to a standstill. Orko manages to disarm Evil-Lyn and toss the Power Sword to Adam, who immediately invokes The Power and become He-Man once again. In a twist however, Adam shares the Power with Skeletor, restoring him to God status. The battle is rejoined once again.

Teela seeks a way to tap into her power fully, but the spirit of her mother warns her that the only way is to become a Sorceress like she did. Teela however, rejects the notion that she must cut off the connections to those she loves. Countering that the attachments to loved ones, fuel her power, not hold her power back. It reminded me of how the Jedi code forbade emotional attachments which led to their downfall thanks to Anakin Skywalker. Personal attachments can be powerful and the notion that Teela did not wish to let go of her loved ones, especially ones she just got back (Adam & Duncan), was an important character moment. This was apparently the riddle that The Power needed to imbue Teela as the most powerful Sorceress ever.

Here the philosophical battle rages across dimensions. Teela tries to appeal to the good nature she saw in Evil-Lyn in Part One. Lyn for her part cannot comprehend that the Universe is nothing more than pain, chaos and emptiness. All of the things she experienced in her life, all she observed when she ascended to godhood. Teela is however able to show her the full view from her perspective, that while the universe is all of those things Lyn said, it is also the beauty of life and love, “It’s Magic.” Evil-Lyn releases the Power and surrenders. Skeletor wastes little time in betraying He-Man with the Power back in his hands, saying that it is his destiny to be locked in eternal battle with He-Man. He-Man, fed up with his stubborn refusal to see the bigger picture, tosses him away from the battle.

With the Battle for Eternia now over, The Royal Family names Andra the new Man-at-Arms. Teela, now as the new Sorceress, says that she will not be like her mother and hold secrets any longer. Adam, thinking Teela will have no more use for him, is surprised when Teela insists that she will always need a champion. The two seemingly admit their feelings for one another in a blushing exchange and holding of hands. Skeletor retreats to Skull Mountain and attempts to reassert his dominance. When Tri-Klops says they serve a new master, Motherboard, Skeletor attempts to destroy it. It goes badly for him, as Motherboard transforms into a humanoid female form before displaying the logo of Skeletor’s old mentor: Hordak.

Final Thoughts on The Season

It’s clear that Kevin Smith’s attempts to update Masters of The Universe won’t go over well with some fans. Children who grew up with He-Man and The Masters of the Universe rightly believed that the property revolved around He-Man. Secondary characters have not been given many moments to shine or develop outside of the shadow of He-Man himself. This was what Kevin Smith attempted to rectify. By creating more well-rounded secondary characters the brand would be stronger as a whole. There is an argument that there was a bit of a bait-and-switch with marketing of the show as a whole. With both halves now out, hopefully those same fans will gain a greater appreciation for what Smith managed to do here.

Dismantling the silly notion that Adam needed to hide his role as He-Man from those closest to him is a major positive. Portraying the reveal of this secret as emotionally damaging was also important to explore. Whether you believe Teela’s emotional reaction to those closest to her was justified, it was genuine. The exploration of Evil-Lyn was the most satisfying story arc in this entire production. Evil-Lyn went from henchwoman to liberated woman, no longer satisfied to live her life in service to a buffoon. She had a much better redemption arc in Part One when she bonded with Orko, but it still paid off in the end. I have to knock them for not giving elevating Prince Adam outside of his being a conduit for the Power. Perhaps we will get that in Season Two?

It is awkward how She-Ra and Adora garnered no mention from this production. With the reveal of Hordak at the end of this season, a reunion between She-Ra and He-Man appears inevitable.

While Part Two provides more action than Part One, it won't satisfy some fans who want the focus to be only on He-Man. However the well written development arcs for both Evil-Lyn and Teela come full circle. Providing satisfying payoffs for plot threads left open in Part One.