Exclusive Interview: Anabelle Takes Us Beyond The Veile

by Eric Joseph
in For The Culture
Reading Time: 11 mins read
0 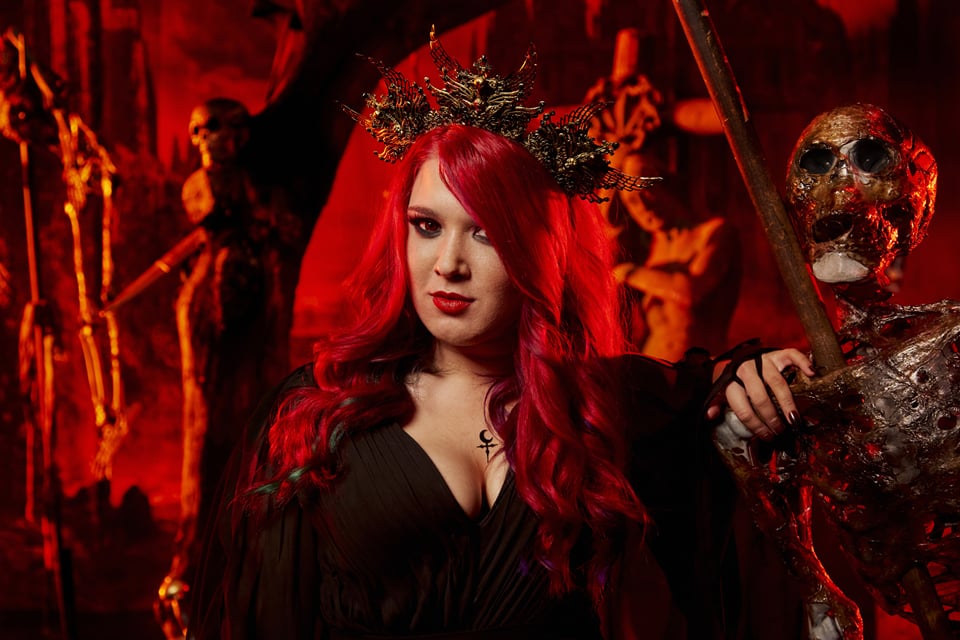 For most of my life, I’ve found myself gravitating toward music that combines different dynamics. And seeing as how metal is my genre of choice, bonus points are scored whenever a given band infuses their style with elements either symphonic or electronic.

Taking that into account, it should come as no surprise that I’ve been in love with the music of Cradle of Filth for over twenty years. Right now, their keyboards are being handled by the one and only Anabelle, who also provides female backing vocals and left quite the mark on their most recent album, Existence is Futile.

What you may not know is that she also fronts another kick-ass band, that being Veile. In addition to belting out some operatic vocals over there, she proves that she can go toe-to-toe with the best of extreme metal vocalists by delivering a truly haunting performance – in a good way. It’s quite appropriate that this outfit prefers the label “blackened horror metal.”

I recently had the pleasure of chatting with Anabelle herself and, let me tell you, it was probably the most fun I’ve ever had conducting an interview. She’s intelligent, funny, and genuinely cares about furthering the abilities of other musicians (we’ll address that quality a bit later). We discussed her background as a musician as well as her work in Veile. Enjoy!

Could you give us a brief overview of your beginnings as a musician and how you became a professional?

Anabelle: So it all started when I was born – I won’t go back quite that far! Music’s always been a very big part of my life, ever since I can remember. My mother is Italian-English and my dad is French-Algerian, so I had many different musics blaring from different parts of the world from different genres at all times. Since I was about five, I used to go into the garden and pick up two sticks and pretend it was a violin I was playing. I had a keyboard as a baby, one of the little toy ones where the keys are bright colors. I’ve been in choir since I was a child, and I guess I always had the fantasy of being a professional musician.

I remember that feeling being solidified when I was about 14, and I sung my first solo. It was a school concert, and it was a “rising stars” thing. It was a John Dowland piece. I was throwing up in the toilet I was so scared. And I remember the feeling of growing up singing. This was the first time anyone in my high school had heard me sing – and there was just this silence after I’d stopped; a good five seconds of everyone staring at me in silence before everyone started cheering. I remember feeling so electric and so alive, and I wanted to chase that feeling.

So, I went on to do my A-Level in music and my Bachelor’s Degree and my Master’s Degree. After my Bachelor’s Degree, I actually started doing what you’re doing now: Doing the PR interviews, interviewing bands, knowing I wanted to be a professional musician, but I didn’t quite feel confident enough to do that. But then, through that, I was able to make contacts and people were curious about my musical work.

My first sort of band job was with Devilment, and that was just through interviewing bands and making friends. When the position came up, one of the guys who was friends with Devilment, Chris Casket, he said to them: “Don’t look for anyone, I know the perfect person,” and that was sort of the start of getting my foot into that world of professionalism. But I’ve been doing the classical world, being a classically trained singer, I’ve done that and composition for awhile. But with the alternative side of music, that was my humble beginnings.

Do you have formal background in choir, or even theater?

Anabelle: Yes, I was a touring chorister during my university years. I toured Europe in choirs, where you had to go in, sing a piece, and then twenty people out of eighty were picked. I was really surprised I got in each year. But yes, I’ve been in choirs and orchestras since I was a child. My high school was a performing arts college, so I did drama and music education there, before going to the various phases of university. And funnily enough, I actually had the choice of doing Cradle or doing my Ph.D. As you can tell, I chose the Cradle route. I chose wrong, didn’t I? I could have been a doctor by now. Instead, I’m just a lowly metal musician. I’m kidding, of course! It was definitely the right decision at the time.

How are the challenges and experiences of fronting a band different, as opposed to being a keyboardist?

Anabelle: They’re very different feelings, because being a keyboardist in somebody else’s band, you’re doing a job. You’re sort of writing to fulfill someone else’s vision. In the case of Cradle, it’s something that’s literally been going since before I was born, so that’s a long legacy to step into. And hopefully I’ve made it enough of my own and will leave my mark within that. There’s more creative constraints because you’re having to write for that, whereas fronting my own band is total creative freedom. I do what I want and, creatively, I can choose what sort of expression I want to invoke, where I want to go musically, what I want to do, and direct the sort of overall process.

Then again, one of the perks of being a keyboardist in someone else’s band is that you don’t have to worry about logistics and finances, sending out merch. Whereas doing it yourself, fronting a band, the merch is under my desk, I cut everything out and put things into envelopes, and bright stickers on them to send off. Different work clothes and very different mindsets.

What are your favorite bands, and did they influence Veile?

Anabelle: I’ve always been attracted to the way people perform and how they invoke emotion. That’s why I did my Kate Bush “Wuthering Heights” cover. Nina Hagen, Diamanda Galas. I like people that are unapologetically themselves, and just completely off-the-wall awesomeness; they’re so unique, full of expression and authenticity. I love performance, I love visual, I love feeling things and emoting. When I was a teenager, I went through those emo years, those full-on My Chemical Romance emo years. I think I did take that into my adulthood, because I like music that was really expressive.

For Veile, every song I approach “in character.” So, “A House in Dust,” which is about the Woman in Black, I fully psychologically embody this character, create this character – and then, quite literally, perform it as how they would be expressing those words. I actually recorded the demo for that song in my best friend’s garage and literally walking around as I was performing, like a theater piece. She did have to actually stick my feet to the floor to stop me moving so she could get the recording.

Devil Doll is a very big influence for Veile; that really expressive, almost poetic delivery, where the words are really shaped by emotion and the story. It’s very involved.

Given the band’s horror theme and sound, did any specific movies or novels influence Veile?

Anabelle: I know Charles [Hedger] is really into these – I can’t remember who it’s by – these really old, experimental horror films that are really quite jarring. There’s, of course, Eraserhead, which I love. I actually love Eraserhead. The sort of David Lynch-esque stuff is definitely in there. I take a lot of influence from visuals and poetry, just scouring old poetry because, blimey, history is grim. And especially in older eras where word of mouth was so important. Stories were told as warnings, stories were told as lessons that were passed on. That’s the sort of origin of most tales, most folklore. That’s why they’re there. They’re a construct of social norms at the time. It’s filled with layers of these, sort of, ethos and expectation.

So very much those older school themes of religion, of ghosts, come from that very Victorian time, when the dead were such a mystifying entity, and the supernatural was seen almost like a…What it was were Ouija boards and seances were seen as a fun activity to do. People wanted a thrill. People wanted that adrenaline. It became a sort of party trick and ghost stories were very popular. Again, okay, what time was the geographical, historical, social context surrounding when these stories were created and why? I find that very inspiring.

Are there any plans for a full-length Veile album?

Anabelle: So, we’ve discussed it, but the biggest crux is albums are really expensive – so expensive! – to make, produce, and sell. We’re just producing what we can, when we can, and doing it in chapter form, to mimic the chapters of a book, or chapters of a story. So maybe they’ll come together. I guess we’ll see.

Considering how the pandemic has affected those in your profession, would you like to plug your “Buy Me A Coffee” perks? (You can visit her page by clicking here.)

Anabelle: That’s really sweet of you, thank you. Yes, obviously Covid has been a huge devastation to many peoples’ lives financially, mentally, physically. Being a musician, it almost felt like I spent all these years hiding from what I wanted to do and working really hard for it. I actually joined Cradle in 2019, but I didn’t get announced until last year because of lockdown, because of delays and delays. So I felt like my life was on pause of living my dream, but it also meant I wasn’t getting any income because musicians only earn, typically, when they’re on the road.

It’s been really hard to survive, so “Buy Me A Coffee” is a great site where you can either donate or create extras and give something back for a payment. So I’ve created a profile. You can either donate money if you feel it, or for services such as a half-an-hour online face-to-face coffee meet with me; personalized videos, personalized autograph and thank you note. I’ve recently launched mentorship packages. I’ve done this for a few bands, with my professional and academic background. I really believe that knowledge is something that’s shared and accessible, so I’ve got some mentorship packages on there, where I go through bands’ tracks with them. I’ll sit down with you and your EP and your ideas, and help you construct songs through critical feedback. Talk about your branding, your marketing, how you can improve. I do lessons as well, where we sit down and I…For instance, I have a student who needs help pacing vocals on a track, so I go through and teach them vocal arrangement. It’s a really mutual relationship, I hope, and I get to connect with people while also helping me financially through this time.

Animal, other than bird: Rat

Food: All of it – but she loves waffles and cookies.

That concludes our interview with Anabelle. Be sure to check out her latest musical offerings via Veile’s “The Ghost Sonata” and Cradle of Filth’s “Existence is Futile.” As she would say, stay haunted! 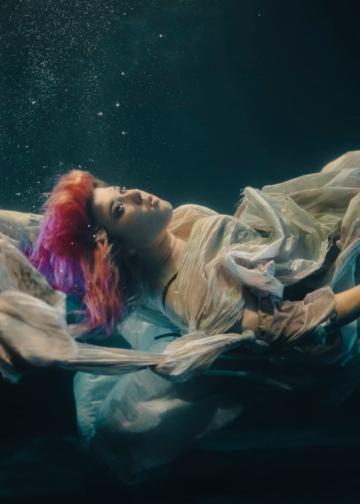 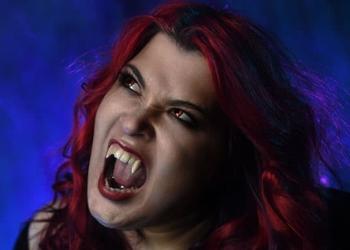 It wasn't very long after my initial interview with Anabelle that I had an idea for a follow-up. Considering how...