Star Trek II: The Wrath of Khan is widely considered the greatest Star Trek film of all time. Some have it in their top 10 of all-time great Sci-Fi films. There’s more than a few great reasons for that. Lets go over them now.

The Mid-Life Crisis of Admiral Kirk

William Shatner had been playing Admiral James T. Kirk for almost 20 years by the time this film came out. The theme of Kirk’s story echoed the thespian himself: How does one fight against the undefeated Father Time? It was something Kirk had carried over from the previous movie entry Star Trek The Motion Picture. In that film, Kirk had manipulated situations to regain command of The Enterprise. It was a desperate attempt to regain something he felt he’d lost, and Bones McCoy astutely called him on it.

In TWOK, Kirk has seemingly surrendered to the inevitable thing that all humans face; The captain is old and worn down by time.  Kirk is shown making references to his age constantly, telling his friends that captaining a ship is a “young man’s game”. Jim also defers to Spock on obvious command decisions, despite being the senior officer. This was Kirk at his lowest point. The veneer of invincibility had worn off. This realistic approach to the swashbuckling hero was refreshing. Setting the stage for his greatest foil to return from the dead. 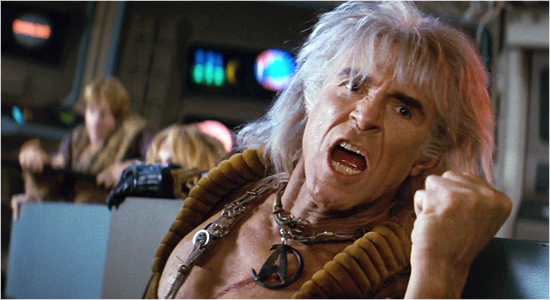 In a historic event, Star Trek transformed a one-off character into its greatest villain. Ricardo Montalban’s Khan had morphed from a charismatic villain clothed in fine clothes, to a revenge-obsessed madman trapped in a barren wasteland. Every scene Montalban had was effortlessly stolen by his presence. As a young child, I was captivated by him as an actor. He commanded the screen, and Khan as a villain was positively magical. His lines were laced with memorable quotes that fans can remember decades later. Also there is simply no other character who could quote Moby Dick so eloquently with his dying breath and have it carry such gravitas.  Khan is a sympathetic villain fueled by righteous anger. Kirk had essentially abandoned him and when beset by tragedy, Khan was left powerless to save his people from it.  He didn’t want to rule the galaxy…he wanted vengeance.

When given the opportunity, he ruthlessly turned situations to his advantage: Subverting Checkov & Capt. Terrell; Massacring the staff at Regula One; Leaving the Enterprise crippled and Kirk seemingly trapped. That last situation, did two things: It gave Montalban a meaty quote line: “I’ve done far worse than kill you….I’ve HURT you…and I wish to go on…HURTING you. I shall leave you as you left me…as you left HER…marooned for all eternity in the center of a dead planet.  Buried ALIVE….buried alive.  The response became one of the most enduring memories of Star Trek before or since.

The Chess Match Between Khan and Kirk

What makes this movie even more amazing is the two protagonists never once shared the same space.  No mano-y-mano showdown or duel at twenty paces. Khan and Kirk engaged in a mental battle of wits that we had never seen in Star Trek or even Star Wars before.  Khan’s opening gambit of using the friendly appearance of the U.S.S. Reliant to lower his adversaries guard and deal serious crippling damage to The Enterprise.  Kirk countered by using a secret prefix code to order Khan’s stolen ship to lower its own shields and leave it open to attack.

Both sides suffered serious losses, but the game of life and death continued unabated.  Khan laid a trap at Regula One which again preyed on Kirk’s weakness for familiar faces and left him trapped with the possibility of escape.  Yet Kirk flipped it around and used coded messages with Spock to buy themselves time to effect repairs to The Enterprise for one last gasp showdown.  A breath-taking free for all ensued in the Mutara Nebula. The battle showcased a pitched battle that highlighted the inexperience of one man vs. another, and finished with a white-knuckle escape from certain death.  Of course that leads me to the next memorable point…

The Death of Spock

If you were to list one of the most shocking movie moments in the 1980s, this is right up there with Darth Vader’s reveal to Luke in Empire Strikes Back. In the opening scene of the movie, the characters were partaking in the infamous “no-win scenario” Kobayashi Maru test.  Here Lt. Saavik sat helplessly as everyone in her training crew seemingly died, including Spock himself.  Spock is of course, the most popular Star Trek character ever played by the legendary Leonard Nimoy. So many fans were sitting on the edge of their seats when Spock bravely entered the Enterprise’s Warp Reactor core to try and engineer an escape for his beloved friends.  Entering that chamber was as stated by Dr. McCoy a certain death sentence as there ever was one.  Spock went anyway.

When we see the worry on Kirk’s face descend into horror upon entering the Engine room the reality of the situation set in. It was a somber moment that left many fans in tears and sadness after they left the theater.  For many this was the point of no return.  There was no internet at the time, nor was there any bulletin boards to throw out theories.  This was it.  Spock was dead….until he wasn’t in the next film 2 years later.  The weight of the scene hammered home that Star Trek had for all intents and purposes, grown up.  This was no longer just a mere TV show.  It was a phenomenon.

The Musical Score of James Horner

Almost all memorable films in history are backed by an epic musical score.  James Horner transformed the music of Star Trek cinematically with his incredible score.  Horner, who was a relative newcomer to the musical score scene wanted to evoke the feeling of nautical battles scene in old Pirate films.  Horner’s work gives us familiar sounds that can be heard in future works such as Willow, Krull, Aliens and his Oscar award winning Titanic.  The standout tracks include the Epilogue/End Title, the Battle in the Mutara Nebula and Genesis Countdown.  I am an avid collector of soundtracks in my musical library.  This iconic score is possibly the most played out of all the various film scores in my collection. Its that damn good.  Take a listen for yourself at the great music in the Genesis Countdown scene and you’ll begin to understand.

The themes of Star Trek were always upbeat. Hopeful for a brighter future.  The Wrath of Khan is the first time where Star Trek deals with the sins of the past coming back to haunt the characters.  Dealing with much darker themes of vengeance, the film was not actively marketed towards kids.  It has proven to be a very hard act to follow.  Since then no other Star Trek film has encroached closely upon its popularity. Not even the very popular 2nd Next Generation film Star Trek: First Contact.  The Wrath of Khan is a mixture of all the things that make movies great. It’s a fun, swashbuckling film that doesn’t pander to its mature audience.  While levity is present in the film, the tone never trends towards the camp of the original series. The stakes are always very high and the weight of what transpires is ever present.

After the success of the film, there was renewed interest in the franchise. There have been 11 films that have followed it and many series on TV and streaming services since this day in 1982.  Fans return to this film for the reasons I’ve listed above, but it can be boiled down to one single meme: 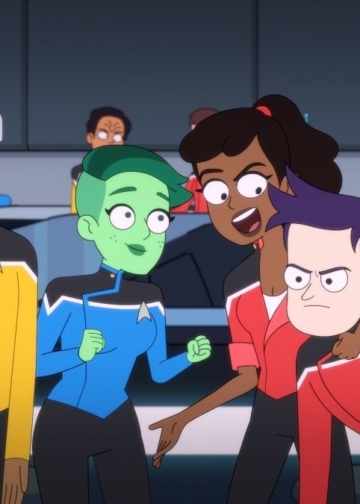 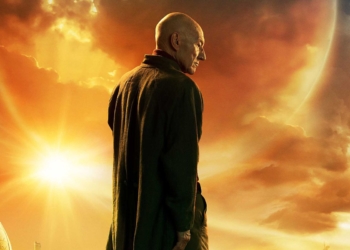 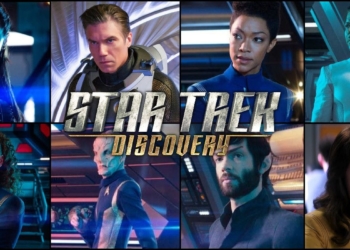