The Top 3 Reasons Why I’m Giving Transformers: The Last Knight My Money

From the title, you may be calling into question exactly WHY I am doing such a thing. Trust me, I’m hardly believing that I am writing these words myself. Yet, here I am, about to expound on the reasons why I am probably going to end up paying to see Transformers: The Last Knight when it opens in June. I had the pleasure of seeing the sneak peek Transformers: The Last Knight IMAX footage last night, and came away with a glimmer of hope that this movie won’t be a total loss. I was expecting to be totally turned off by everything I saw, so I was pleasantly surprised. So i wanted to share what I thought, and explain to myself and to you, why I think Michael Bay’s last Transformers movie is worth the effort. Perhaps you’ll only think me slightly crazy after i’m over, but humor me alright?

First, let me say that I have not exactly been an exuberant fan of the Michael Bay movies of this beloved childhood favorite of mine. It’s been okay at the best of times and absolutely abysmal at the worst of times. I liked the original movie for the most part, and I didn’t believe I could get any angrier than I did with the 2nd entry (Those buffoonish twins, the Constructicons and Devestators “balls”…ugh). The 3rd film was by far the most impressive to me, with the numerous nods to the cartoon history, the engaging plot of human Decepticon puppets and the incredible kick ass action in the 3rd act. The fourth movie was a calamitous disaster. It’s the only film in the franchise I can say actually put me to sleep in the movie theater ON THE FIRST DAY.

So then, why am I going to see Transformers: The Last Knight then?

Well, honestly what had me sold was the mythology they are trying to build. I’m a sucker for the Arthurian legend, and since that particular legend will play a huge part in this film, it was an attraction point for me, even if on the surface it sounds ridiculous. See, it turns out that Cybertronians actually were part of a covenant with King Arthur and the Knights of The Round Table. Sounds stupid but it plays into the larger mythology behind why Cade Yeager is an important figure. After the last movie, Cade is one of the most wanted men on the planet. He is one of a small band of humans who are actively protecting the remaining Cybertronians, and has built a sanctuary for them hiding in plain sight. As we only got snippets of footage in the sneak peek, I’m piqued to find out just how Cade became so wanted by the world’s governments as a traitor to the human race.

How could I not want to see one of the greatest living actors in the world act in a Transformers movie. He’s not bringing the same gravitas as he does when he plays the All-Father, Odin in Thor, but he plays a part in outlining the mythology in the film. In the snippets, he made mention of being the last in the line of Witwickys. Now I could be mistaken, but upon hearing that, it made me wonder exactly why he’s the “last” in the line? Does that mean that Sam Witwicky (Shia LeBouf) is actually dead? He also seems to have met Bumblebee when he was a young lad, which means that Bumblebee also has been to Earth before landing with Optimus Prime in the first film. He carries about him a very regal english Lord aire, but who is he really? Why does he have all of these Cybertronians around him like his diminutive, yet powerful Cybertronian manservant?

Obviously, he’s not as we’ve seen him in the trailer fighting Bumblebee…but is that really him? Has the Optimus we know and love been subverted somehow into doing his Maker’s bidding? Speaking of his maker, in the snippet I saw, the “Maker” had a distinctly feminine voice. As Unicron is the supposed big bad in the film, does that mean Unicron has been gender-swapped? I mean, no one can exactly channel Orson Welles and evoke the same emotional weight as the legendary actor did, but making Unicron a female Cybertronian is a twist I would not be expecting. Beyond that, just what kind of hold does the Maker have on Optimus and what are their goals in fighting again on Earth? Is Earth to become the new Cybertron?

Those are my top 3 reasons as to why I’m giving Michael Bay my money on opening night. I didn’t expect it to happen, truly. Visually, Michael Bay and Zack Snyder are two of the best i’ve ever seen. Yet, they both have had the misfortune of destroying perceptions AND childhood dreams in one fell swoop. I can risk Michael Bay doing it one last time, because it truly IS the last time. I only hope it’ll be money well spent. 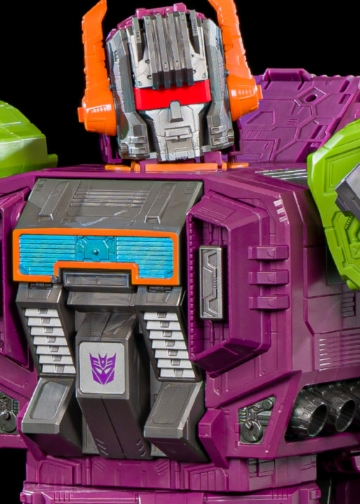 "It will take more than your pathetic little darts to stop Scorponok!"

Take a moment to revisit your childhood and pluck one of those toys you didn't get out of the past...