Children of Ether is an anime you MUST see!

Coming soon, hopefully to a theater near you, Crunchyroll presents the animated film The Ancient Magus’ Bride, based on the popular manga of the same name. More importantly, playing before the film will be the exclusive first look at Children of Ether, an original anime production from Crunchyroll. That itself is a big deal, because it’s the brainchild of LeSean Thomas.

Who is LeSean Thomas?

LeSean Thomas is someone worth your notice. As with many animators, you’ve seen his work for decades and not really known just how much influence he’s had on you. Mr. Thomas burst on the scene awhile back with BattleSeed an animated online series produced for UBO, which was presented at the New York Anime Film Festival in 2000. However, his notoriety came from being the supervising character designer and co-director on seasons 1 and 2 of Adult Swim’s Peabody Award-Winning series The Boondocks. We all know those were the BEST seasons of that NAACP Image Award nominated program. 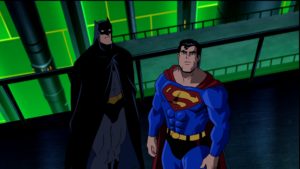 Thomas relocated to South Korea for JM Animation to be a part of the in-house animation staff. Shortly thereafter, he was hired to be in-house Storyboard/Animation production artist on The Legend of Korra for Nickelodeon. He’s also worked on Black Dynamite, Lizzie McGuire, Kim Possible, Ben 10: Alien Force, The Batman, Batman: Brave And The Bold, Green Lantern: First Flight, as well as the supervising character designer for Superman/Batman: Public Enemies for Warner Bros. Animation, remembered for its accurate recreation of comic artist Ed McGuinness’ panels.

The Man Behind Cannon Busters

Perhaps you remember this? It’s the Kickstarter-funded original anime based off of Thomas’ comic book series. Featuring the talents of Joe Maduiera (Battle Chasers, X-Men) and Tim Yoon (Batman: Under The Red Hood, The Legend of Korra). Cannon Busters was successfully funded, but it was only a next step on Thomas’ journey. The upcoming release of Children of Ether was the ultimate goal. Crunchyroll announced last year the collaboration with Thomas for an original production for their SVOD service. Which is interesting as these types of productions are rare. Rarer still is the quality of the staff attached to the project, and that fact instills hope for the future! Imagine the possibilities! It was something of a dream of many kids like myself growing up, and Mr. Thomas, an African-American from The Bronx, is making it happen!

This deserves all the support it can get! Make sure you’re present by purchasing your tickets here!

The Devil is a Part Timer Season 2 – Official Trailer